If you are from Atlanta you definitely know Figo.  It is a cute little pseudo-chain in which you pick a pasta and a sauce and some waiter with an Italian accent gives you a brightly painted pepper grinder and then brings it out to you.  They have Italian sodas and Tiramisu to make everything feel authentic, and even offer to sprinkle your pasta with parmesan for you.  It’s pretty swanky.  Look at that moped! 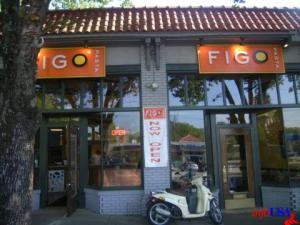 It’s also only eight dollars, which means it has been a go-to since the earliest days of high school.  Here is a typical conversation about where to go to dinner:

“Hey, let’s try some place new tonight!  Maybe in midtown, we could do thai or something…”

“Ugh I had thai last night.  What about that new tapas place?”

“Nah it’s super expensive and the wait is always out the door.”

Suffice it to say it’s a classic.

I have tried pretty much every pasta/sauce combination, because I have a difficult time deciding on anything and am constantly afraid that I am missing out.  However, after years of testing, I have found the ultimate.  Penne with Siciliana.

Siciliana is a spicy tomato sauce with roasted eggplant and big chunks of fresh mozzarella.  Perfectly balanced bites are key.  And I have found its secret and created it at home!  And now you can too! 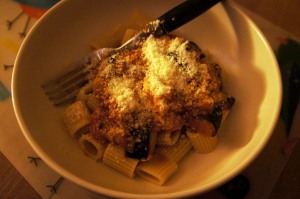 This sauce is also a great way to shine the spotlight on eggplants.  I can’t be the only one who buys these guys because they’re healthy and on sale and then can never figure out a way to use them.

Ideally this sauce would go with homemade spinach penne, but let’s be real.  This is pretty good.

Here are some happy campers eating their Siciliana.  A guarantee cure for the Winter Time Blues, at least while you’re eating it.

Preheat the oven to 400 degrees.  Toss eggplant with two tablespoons of olive oil and sprinkle with salt.  Roast for 30-40 minutes, until eggplant is wrinkly and soft.

Heat one tablespoon of olive oil in a large saucepan.  Add onion, red pepper flakes, and a half teaspoon salt, stir for a minute or two, add garlic.  Cook, stirring occasionally, until translucent.  Add canned tomatoes and stir.  Let simmer for thirty minutes.

While sauce is cooking, heat large pot of water and salt it.  This is my pet peeve.  Pasta water should be as salty as the ocean!  When boiling add your preferred pasta, but use something tube-y with texture (rigatoni, penne, etc).  Cook until al dente according to box.

Take pot off heat and let cool slightly.  Using immersion blender, or actual blender, blend sauce until smooth.  Add in roasted eggplant and chunks of mozzarella.  If you have fresh basil add that too, I am too cheap.

Top pasta with sauce and sprinkle with parmesan.  At Figo they top this sauce with Ricotta Salata, which would be good too.

Buon Appetito! (I googled that)